Campaigners have reacted with dismay to the news the Treasury does not plan to reduce the Lifetime Isa withdrawal penalty for another 12 months.

The news means aspiring first-time buyers will again be charged their own money from April to raid their house or retirement deposits if they run into financial difficulty and need to access the money before they can claim benefits.

The Treasury reduced the penalty to withdraw money from the tax-free account from 25 per cent to 20 per cent last May for a year after This is Money revealed savings held in the account were included in the means test for Universal Credit.

But while a petition calling on the penalty to be permanently reduced to 20 per cent, meaning first-time buyers would only lose a government bonus rather than their own savings, has received more than 17,500 signatures, the Treasury appears to have no plans to extend the reduction.

This is despite the fact other measures designed to help those in financial difficulty, including the furlough scheme and the £20 uplift in Universal Credit, were extended until September.

Former pensions minister Sir Steve Webb, now a partner at consultants Lane Clark and Peacock, said the case for the reduction was ‘just as strong today’ as it was last May.

The only reference to the Lifetime Isa charge in the 107-page Budget document came on page 81 and stated: ‘To help individuals access savings if needed during the pandemic, the Government temporarily reduced the Lifetime Isa withdrawal charge from 25 per cent to 20 per cent for unauthorised withdrawals made between 6 March 2020 and 5 April 2021 across the UK.

‘This means that Lifetime Isa investors can withdraw their money for any reason over this period, only losing the government bonus earned on the amount they withdraw.’

In response Nathan Long, from DIY investment platform Hargreaves Lansdown, which launched the petition, said: ‘The Government’s decision not to extend the reduction to the Lifetime Isa withdrawal penalty is bizarre and hugely disappointing.

‘The risk of people having to unexpectedly access their savings is as high now as it was when they first introduced the reduction back when the pandemic was kicking off.’ 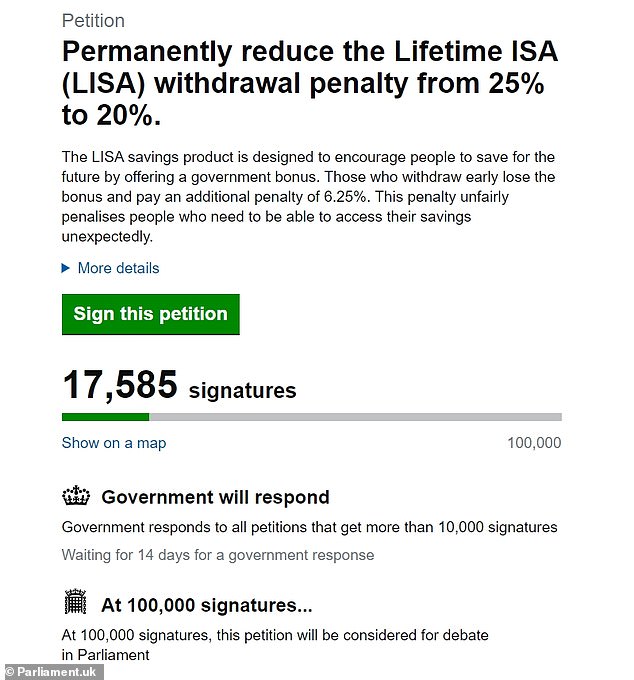 A petition calling for the penalty to go permanently has reached 17,500 signatures, but the Government is still yet to respond

He adds: ‘There’s a real risk that people who have worked hard to do the right thing and save for their first home or for retirement through the Lifetime Isa will be punished for their efforts if their circumstances change.

‘While the future is so uncertain, there’s also the danger that it puts people off saving and investing for the long term, just in case things take a turn for the worse and they have to pay a penalty to access their money.’

The risk of people having to unexpectedly access their savings is as high now as it was when they first introduced the reduction back when the pandemic was kicking off.

The Lifetime Isa enables savers under the age of 40 to open a tax-free account and pay in up to £4,000 a year.

Cash and stocks and shares options are available, and the Government tops up the amount saved by 25 per cent, up to a maximum of £1,000 a month.

But money cannot be withdrawn except for the purpose of buying a first home or after the holder turns 60 without incurring a penalty.

Before the penalty was reduced from 25 per cent to 20 per cent savers would be charged some of their own money as well as the bonus.

Someone who saved the maximum £4,000 would end up with £5,000 after the Government bonus. But if they withdrew that, they would be charged £1,250, which includes the bonus plus £250 of their own savings.

Paul Bridgwater, head of investments at the mutual One Family, added: ‘We would like the Government to permanently reduce the withdrawal penalty.

‘Lifetime Isas are designed to meet the needs of young people saving to get a foot on the housing ladder and we had hoped that the Government would have used this Budget to take steps to increase its appeal.

‘With personal tax thresholds frozen, these tax-efficient savings products will play an even bigger role in people’s finances into the future.’

The petition reached 10,000 signatures 14 days ago, meaning it required a response from the Government, but the Treasury is still yet to set out its reasoning as to why it is increasing the penalty to 25 per cent again from April.