The Mayor of London is attempting to apply pressure on local authority bosses to restarted the loathed project.

It comes after the scheme was dramatically scrapped in December amid a row between Transport for London (TFL) and Conservative-run Kensington and Chelsea Council (RBKC).

But ahead of a crunch meeting later this month, the Labour mayor is pushing a new TFL commissioned poll which claims more than half of local residents support the scheme.

The survey, released today by City Hall, claims 40 per cent ‘strongly support’ protected lanes in Kensington High Street. A further 16 per cent ‘slightly support’ them, according to the survey.

However Kensington and Chelsea Council today appeared to cast doubt over the strength of the poll, citing concerns by residents that the question were ‘leading’.

It comes the council is set to review its decision at a meeting on March 17, without the involvement of the lead councillor who ordered the lanes to be scrapped.

Sadiq Khan has today risked the ire of London’s motorists by urging council chiefs to reinstate the despised High Street Kensington cycle lane. Pictured: Cyclists protested the closure of the lanes in December 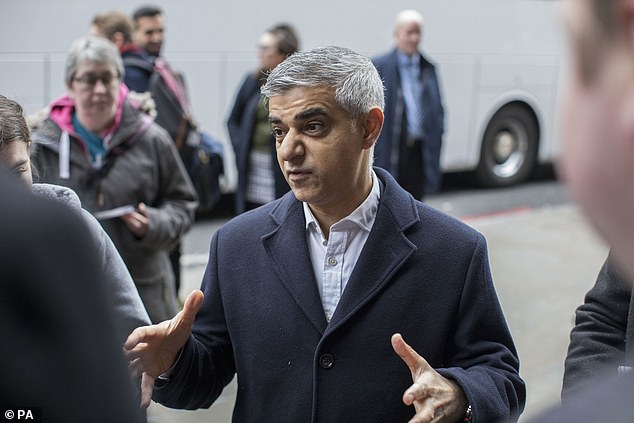 Ahead of a crunch meeting later this month, the Labour mayor (pictured) is pushing a new poll which claims more than half of local residents support the scheme

Ahead of the meeting, Mr Khan today said that research by ICM Unlimited, who telephoned more than 1,000 local residents, showed 56 per cent of people supported the scheme.

Around 30 per cent either strongly opposed or slightly opposed the project.

What did the ICM Unlimited poll find?

The survey, commissioned by TFL and carried out by ICM Unlimited, asked a representative sample of 1,000 RBKC residents about their attitudes towards protected cycle lanes.

According to the results, 56 per cent of respondents supported the cycle lanes, with 30 per cent against.

The survey shows that 40 per cent of respondents ‘strongly support’ protected lanes in Kensington High Street, and a further 16 per cent ‘slightly support’ them.

Speaking about the survey, Mr Khan said: ‘The ripping out of the new cycle lanes last year was not just an unacceptable waste of money, but went against what everyone could see: that the safe space for cycling on Kensington High Street was working.

‘Cycling numbers were up, bus journey times down, yet the Council were swayed by a few loud voices committed to the status quo.

‘I admire RBKC’s commitment to putting their residents first.

‘What this poll shows is that their residents want to be able to cycle along Kensington High Street and other main roads across the borough.

‘I urge the Council to make the right decision and work with TfL to reinstate the cycle lanes.’

However the council today appeared to raise doubts about the survey. In a statement to the Evening Standard, a spokesperson said: ‘We have asked the Mayor of London to see the questions and the methodology behind this survey because our residents have raised concerns.

‘We have received complaints that questions were leading and it was not clear which organisation the survey was being run by.’

The lanes were installed last year after the council were awarded more than £300,000 as part of Transport for London’s Streetspace scheme.

But the authority removed the lanes in December after receiving 322 complaints from residents and two business organisations.

The removal of the lanes, which were being used by more than 4,000 cyclists a day, sparked a backlash from the borough’s teachers and cyclist, who organised a protest after the decision was announced. 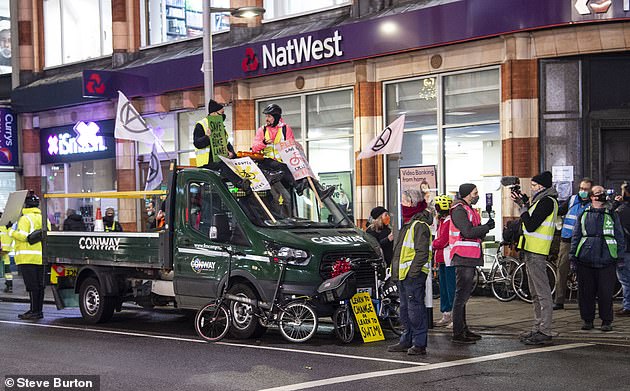 Mr Khan threatened to seize control of the road from the Tory-controlled local authority, reinstate the lane and force council chiefs to repay the £300,000 of public money used to put it there in the first place as a result.

The row took a bizarre turn in December last year when it was revealed that Boris Johnson’s £95,000-a-year cycling tsar told the Royal Borough of Kensington and Chelsea not to rip out the lane – and even pledged to send his boss along to be pictured riding down it.

September 28 – Kensington council begins installing the lanes, saying they would increase the number of people who could access the high street during the pandemic

October 14 – The work is complete

2nd – Activists glue themselves to a work van, temporarily halting the removal work

7th – Council confirms all the bollards had been removed.

March 3 – Sadiq Khan calls for the scheme to be reinstated following a survey which claims 56 per cent of local residents support the project.

The council however appeared to raise doubts about the poll, saying it had received complaints from residents that questions in the survey were ‘weighted’.

Andrew Gilligan made the outlandish offer as he desperately pleaded with transport chiefs over the Kensington route amid nationwide fury at the new £250 million bike lanes that have caused major congestion and blocked emergency vehicles in traffic across the country.

Then, in a blow to the scheme, reports in December indicated that the level of a toxic car exhaust pollutant dropped across parts of south London following the scrapping of Low Traffic Neighbourhoods (LTN).

Levels of nitrogen dioxide (NO2) were higher at 11 south London streets when residential roads were closed and dropped when seven Wandsworth Council schemes were halted, The Telegraph reported in December.

Four weeks of analysis revealed in a council review show that pollution levels were higher on main roads where congestion had shot up considerably, often coming to a complete stop during rush hour.

The borough had brought in seven LTNs in August amid a Government drive to promote walking and cycling following the lockdown.

Trials were halted in September because of the ‘impact on access for the emergency services’ and ‘significant and sustained traffic congestion on the main roads was identified, raising concerns about pollution’, according to the 25-page report.

The report says that the LTNs led to ‘an unexpected and unacceptable outcome that required the council to take the decision to pause, step back and review’ them.

According to TfL, more than 3,000 people each day, of all ages, used the protected cycle lane on Kensington High Street while it was in place.

They say data from Santander Cycles shows a significant increase in hires at docking stations close to the route when it was in.

Hires at the five closest docking stations were up by 14 per cent in October, compared to a decrease of 0.5 per cent across the wider network, according to the figures.

TfL say there data shows that the trial cycle lanes did not lead to an increase in bus journeys times.

In the two weeks prior to the removal of the cycle tracks, the journey times for buses were lower than the same period in 2019, at 4.75 minutes per km, TfL say.

Professor Neil Alford, Associate Provost (Academic Planning) at Imperial College London, said: ‘At Imperial, we have a strong focus on active and sustainable travel and continue to encourage our community to cycle or walk to campus where possible.

‘Many of our students and staff used the Kensington High Street cycle lane daily prior to its removal, valuing it as a safe and protected route between our South Kensington and White City campuses, in the absence of a joined-up safe cycle route from west to central London.

‘It is fantastic to hear that a majority of local residents support a protected cycle route and Imperial would welcome the opportunity to work with RBKC to reinstate a trial cycle lane.’