Property prices in England are now seven times the local salary on average, as house price inflation appears to be outgrowing wages.

The typical house costs more than seven times the median annual salary of £31,596, but in some parts of London and the South East the multiple is much higher, reaching up to 27 times the yearly wage.

New analysis conducted by the broker, Online Mortgage Advisor looked at 10 years of median house prices from local authorities in England, Scotland and Wales, and compared them to each area’s median gross salary to see where homes had become less affordable for the average resident.

It identified a widening gap between house prices and wages, and also a concerning discrepancy between what men and women can afford.

In the UK, 290 of 361 local authorities were deemed to be less affordable for local residents today than they were in 2011.

This means that property prices in 80 per cent of local authorities are less affordable now than at the beginning of the last decade.

For example, full-time employees in London could typically expect to spend around 9.1 times their annual salary when buying a home in 2011.

Today, this has risen to 12.4 times the median annual salary in the capital – more than any other region in the UK.

‘One of the main reasons for the discrepancy between house prices and salaries is historical,’ says Jeremy Leaf, north London estate agent and a former RICS residential chairman. 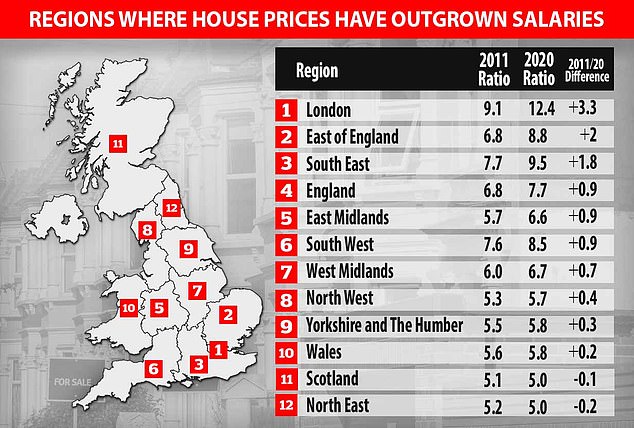 ‘With many buyers benefiting from the equity built up in previous house price booms, this is now being shared through the generations from grandparents to parents to children.

‘This is giving a further lift to prices and making it even more difficult for new entrants who cannot take advantage of these handouts to place their first foot on the housing ladder.’

East Anglia and the South East have also seen property prices grow faster than the salaries of residents.

People in East Anglia now face property prices that are 8.8 times the median income of the area, up from 6.8 in 2011.

Whilst most regions of the UK are seeing property prices outstrip median salaries, Scotland and the North East of England have bucked the trend.

Both regions have property prices that are 5 times the median salary, down from 5.1 and 5.2 respectively in 2011.

The local authorities in London and the South East have experienced the greatest discrepancy between house prices and median salaries.

The median property price in Kensington and Chelsea is now 27.5 times higher than the median annual salary of its residents, whilst Westminster property is 22.6 times higher.

The comparable figures in 2011, were 16.5 and 14.3 times the median incomes of their inhabitants.

‘Ultimately the reason for this disparity comes down to the very low interest rate environment that we have been in post-the 2008 as well as wages stagnating and not necessarily rising in line with inflation,’ says Chris Sykes, mortgage consultant at Private Finance.

‘While this applies to all regions and areas of the UK, the disparity is far more pronounced in London, especially as a number of areas in the capital are not comprised of average people on average salaries, but the wealthiest people from around the world, with London property effectively become an asset class and status symbol for this global elite.’

As well as looking at the gap between salaries and house prices, Online Mortgage Advisor also analysed Zoopla’s property listings to establish the gap between the homes that men and women could afford.

Using median wages from ONS figures, and basing affordability on a typical mortgage of 4.5 times the annual salary with a 15 per cent deposit, it found that 31 per cent of UK properties were affordable to men on the median annual gross salary of £34,068.

This figure dropped to 21 per cent for women, who currently have a median annual salary of £28,029.

This means that men can afford 10 per cent more of the properties currently available for sale in the UK than women. 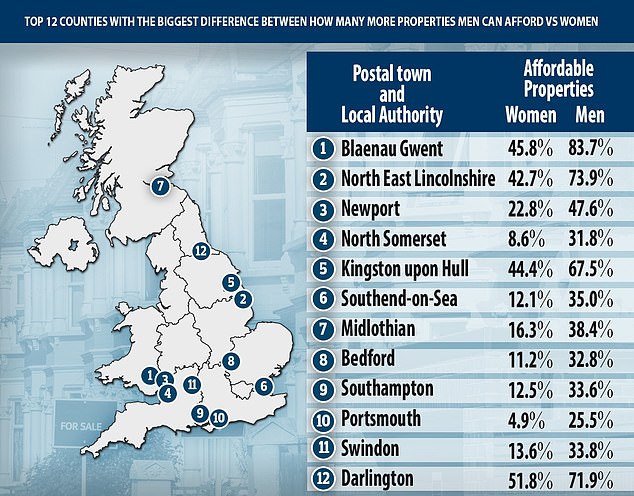 In the UK 31% of properties are affordable to men. but this figure drops to 21% for women

The discrepancy also looks worse in specific local authorities. In Blaenau Gwent, in Wales, women can only afford 46 per cent of the available properties in the area, whilst men can afford 84 per cent of available stock.

North East Lincolnshire has the second-largest gap between affordable properties for men and women.

Only 3 counties in the UK were more affordable to women than men – none located in England.

In most local authorities, therefore, women face greater barriers to home ownership than men when buying independently. Unless they have substantial deposits to bridge the gap, they are at a disadvantage due to the gender pay gap.

‘Lenders do generally extend flexibility where possible, for example, giving mortgages to those on reduced or no pay during maternity leave if they are going to go back to work, based on their previous level of basic income,’ explains Sykes.

‘But unfortunately there is a disparity between men and women when it comes to incomes and this impacts the maximum mortgage amount achievable.

‘Action does need to be taken by government to close the gender pay gap and have everyone on a more level playing field.’

In the Budget, the Chancellor announced the Government Mortgage Guarantee Scheme which will enable homebuyers to secure mortgages to buy homes with only a five per cent deposit. 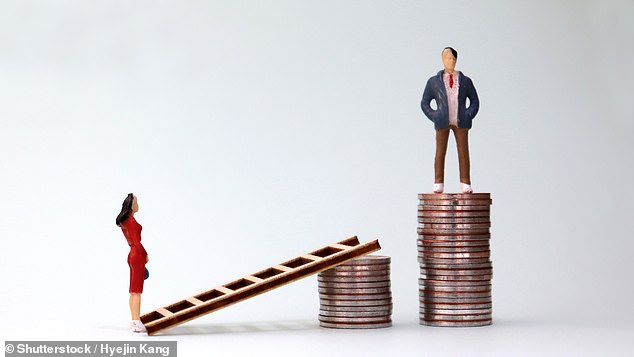 However, some feel this fails to tackle the real issue – helping first time buyers who lack sufficient income to afford the mortgage in the first place.

‘Unfortunately, the latest changes in the Budget, such as extending the stamp duty holiday and the mortgage guarantee scheme, help more of those who have, rather than those who have not,’ says Leaf.

‘With neither the mortgage guarantee nor stamp duty concession restricted to first-time buyers, it could be said that those who didn’t require help have benefited most.’

Aspiring female homeowners are at a disadvantage, based on the gender pay gap, and some feel the government need to do more to address this issue.

‘With plans to continue to raise council tax whilst freezing personal tax allowances from April 2021 for five years, this has done nothing to help women.

‘Despite the government’s proposals of levelling up the economic disparity between the North and South, the Chancellor has done nothing to address the issue with the gender pay gap.’

For those seeking lenders that can offer higher loan-to-income ratios, it would be wise to speak to a mortgage advisor.

‘Higher borrowing might also be achieved where you opt to fix a mortgage for a longer period of time – for example five years or more.’