England and Wales suffered suffered no excess deaths last week for the first time since August, official figures showed today in a sign the worst of Britain’s second wave of Covid is over.

Office of National Statistics (ONS) data revealed there were 10,987 fatalities from all causes in the week ending March 12 — 4.4 per cent down on the five-year average (11,498). Deaths were below expected levels in all regions except the East Midlands.

Experts hailed the figures as proof the second wave of coronavirus is over. Even Professor Neil Ferguson — the Government adviser whose grim modelling spooked ministers into the first lockdown a year ago today — said the data showed ‘the second devastating wave of the pandemic is behind us’.

Statisticians use the five-year average to estimate how many people would be expected to die in any given week, with anything above average considered as ‘excess deaths’.

They had suggested deaths could dip below this level by Easter because the coronavirus outbreak was shrinking so quickly thanks to lockdown restrictions and the smooth vaccine roll-out. Experts also said deaths were front-loaded because so many elderly and vulnerable people fell victim to the disease last spring.

Covid deaths have also dropped by a third in the same time-frame, the figures showed, after 1,501 were registered last week compared to the 2,105 from the seven-day spell before.

And deaths among care home residents linked to the virus have halved in a fortnight, after 300 were recorded last week compared to the 636 two weeks before.

The weekly figures are different to the Department of Health’s, which publishes a daily Covid death toll. The ONS figures lag behind by about two weeks because they go through every death certificate to spot every suspected or confirmed coronavirus death.

There were fewer deaths from all causes including heart disease, dementia and Covid last week than the number expected based on the five-year average (blue line). This is the first time they have dropped below this level since August, and experts said it suggested the second wave is at an end 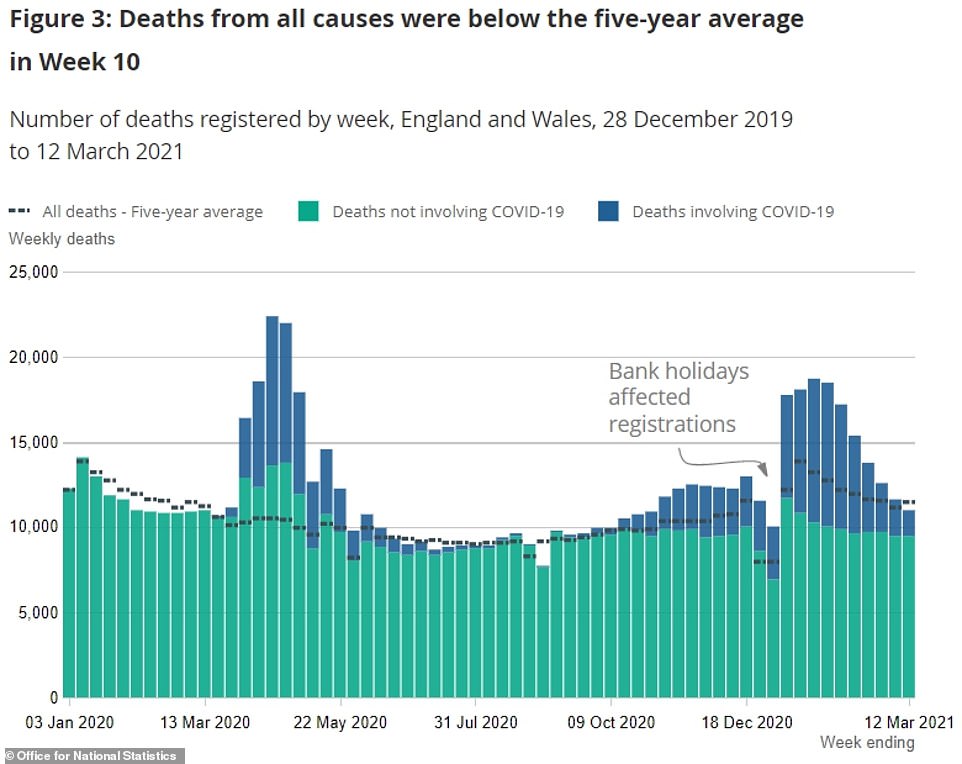 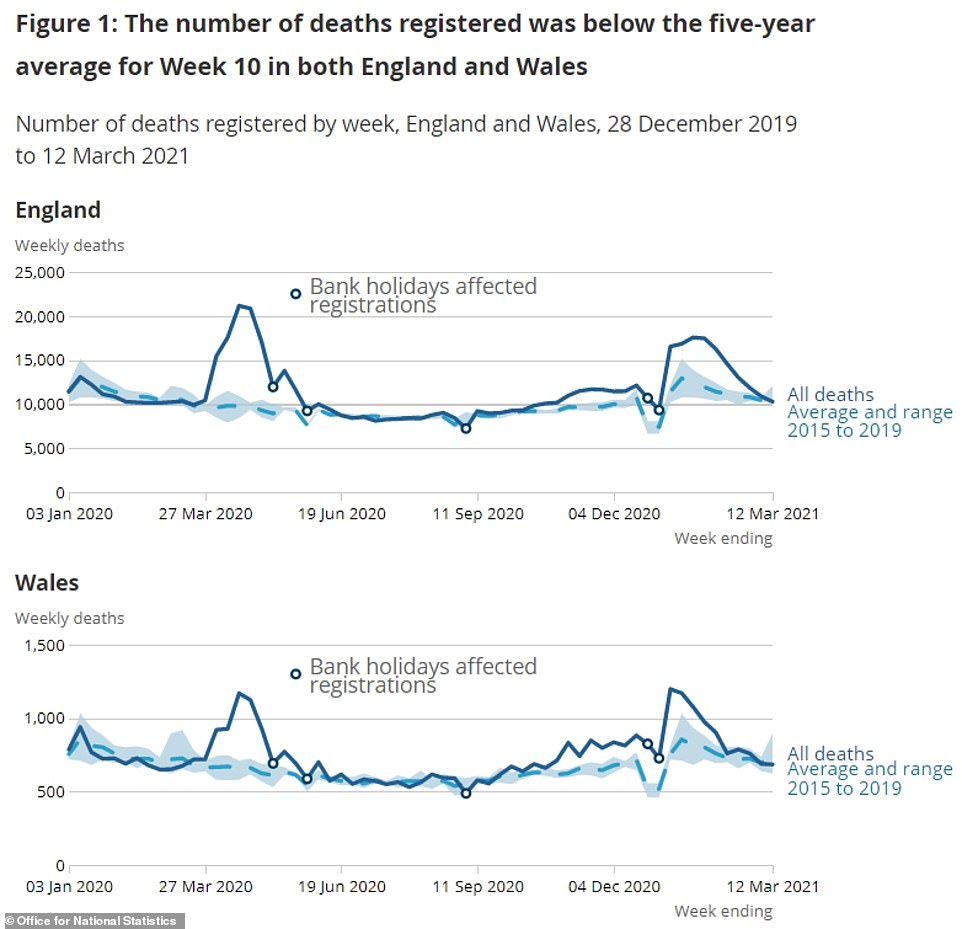 This graph also shows deaths dropping below the five-year average. There were 511 fewer fatalities than expected, marking a 4.4 per cent dip from the average 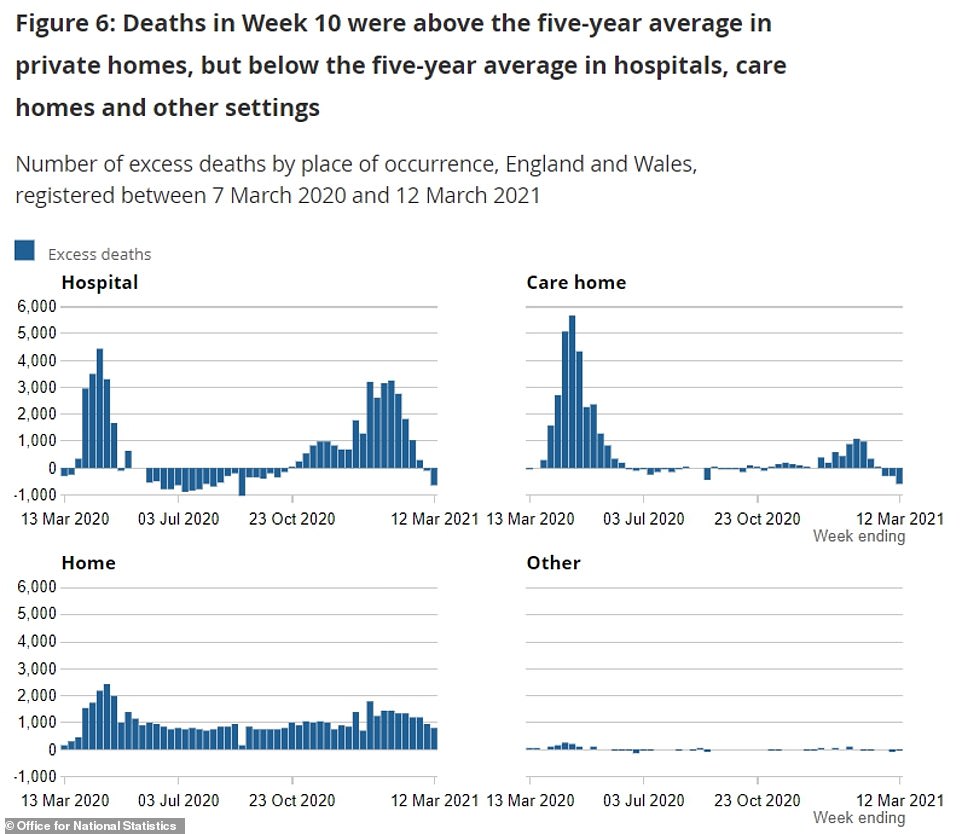 ONS data also showed that deaths in care home residents from the virus had halved in two weeks, after 300 were recorded last year compared to 636 two weeks ago 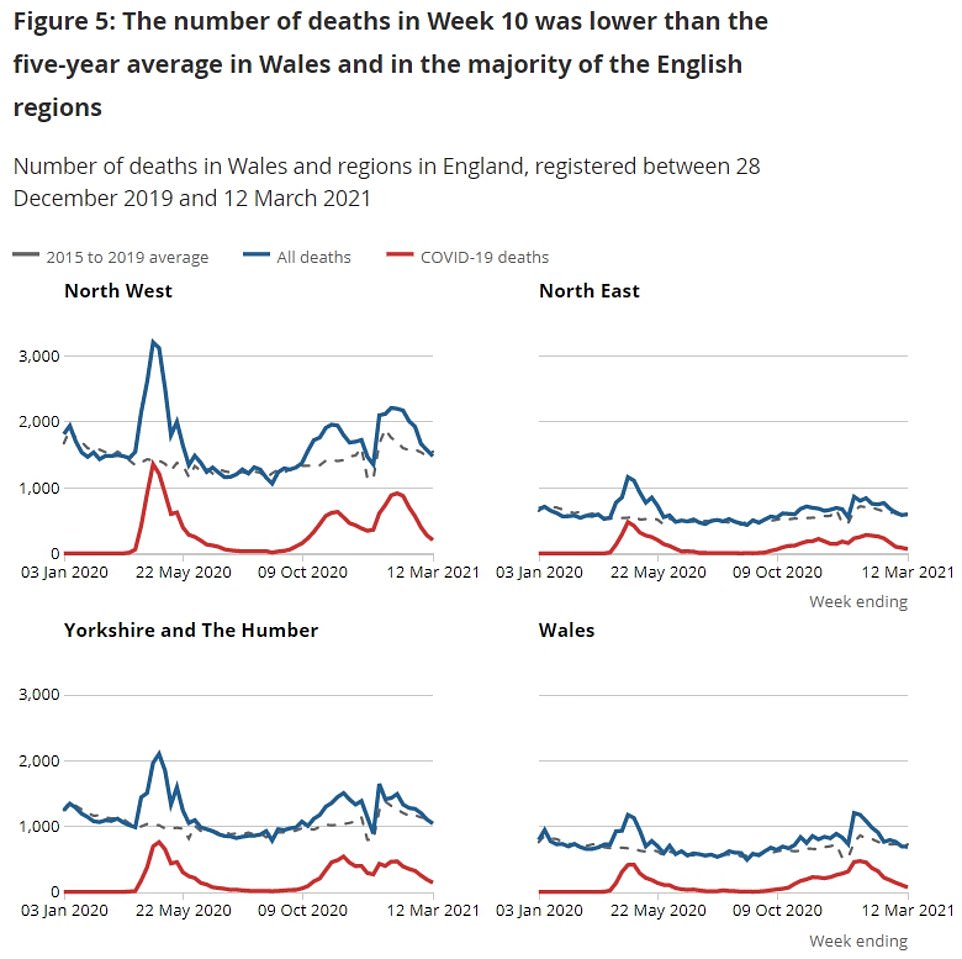 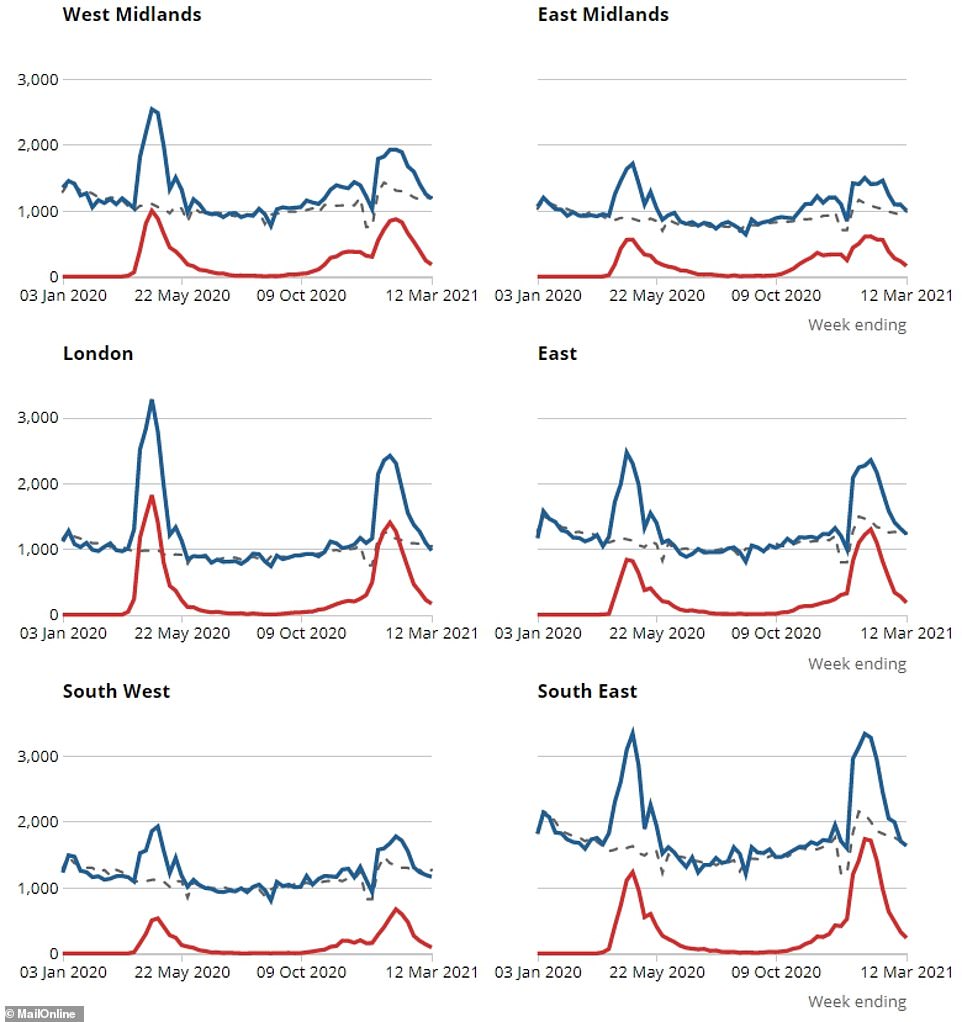 Deaths from all causes also dipped below the five-year average in every region except the East Midlands, in another sign the second wave has come to an end

Prince Charles today called on Britain to ‘remember the lives tragically cut short’ by Covid-19 ahead of a national vigil this lunchtime as Boris Johnson marked the first anniversary of the first national lockdown in 2020 by vowing to end them ‘once and for all’.

The Prime Minister will hold a national minute’s silence at midday to remember the 126,000 people who have died during the pandemic as around 10,000 families still grieve their loved-ones.

And tonight Britons are being encouraged to stand on their doorsteps at 8pm and light candles as a ‘beacon of remembrance’ for those who have lost their lives.

Prince Charles has lent his support to the day of national reflection being held on the anniversary of the first UK lockdown.

In a recorded message, the heir to the throne, who is a patron of end-of-life charity Marie Curie, said: ‘We have all been inspired by the resourcefulness we have witnessed, humbled by the dedication shown by so many, and moved, beyond words, by the sacrifices we have seen.

‘Whatever our faith or philosophy may be, let us take a moment together to remember those who have been lost, to give thanks for their lives, and to acknowledge the inexpressible pain of parting. In their memory, let us resolve to work for a future inspired by our highest values, that have been displayed so clearly by the people of this country through this most challenging of times.’

And in a message released last night, the Prime Minister also urged people to ‘also remember the great spirit shown by our nation over this past year’, as millions of NHS staff and other critical workers worked tirelessly through the pandemic. While tens of millions of people have worked from home and home-schooled their children during the greatest crisis the country has faced since the Second World War.

This marked the first time deaths had dipped below this level since the week ending September 4 when 7,739 deaths were recorded, which was 1,443 fewer than the 9,182 expected at the time of year.

Across England all regions registered fewer deaths than expected except the East Midlands, which had 12 more fatalities than the 987 predicted.

The South West had the biggest dip from the five-year average after deaths in the region fell by 8.4 per cent, or dropped 107 below the 1,268 fatalities predicted.

Professor Ferguson, a top epidemiologist and No10 adviser at Imperial College London, said the figures were an encouraging sign that the UK had now passed the worst of the second wave.

‘But calling epidemics “waves” can be misleading, in implying a phenomenon which has reached a natural end,’ he said today. ‘That is not the case here.

‘The rapid decline in deaths we’ve thankfully seen is entirely because of the lockdown and the rapid roll-out of vaccines.

‘So, while I’m optimistic that this we will be able to return to something more like normal in the next few months, we need to remain vigilant and cautious in the pace with which social distancing is relaxed – particularly given the threat still posed by new variants of the virus.’

Professor Kevin McConway, a statistician at the Open University, said it was ‘excellent’ to see deaths had fallen below the five-year average.

‘Last week I commented that I expected death registrations in England and Wales to fall below the five-year average in the next week or two, and in fact it took only one week,’ he said.

‘This fall in the total number of deaths is almost entirely because deaths involving Covid-19 have fallen very considerably.’

The statistician said there was a ‘really consistent pattern’ in the data of deaths involving the virus falling every week.

‘Some of this will be from the continuing effects of lockdowns,’ he said.

‘The data so far go up only to the first week when schools reopened in England, and though that probably had an effect on slowing up the fall in infections, it’s too early to see any sign of that in death registrations.

‘But a considerable proportion of the fall in deaths involving Covid-19 must be because of vaccinations.’

The ONS figures also showed deaths linked to the virus had dipped below 250 in every region last week. The lowest levels were in the North East (66), followed by the South West (91) and Yorkshire and the Humber (139).

There were also 1,957 deaths that involved flu and pneumonia in the week to March 12, but only 299 had this recorded as the underlying cause of death.

For comparison, 1,197 Covid deaths had the virus marked as the underlying cause. 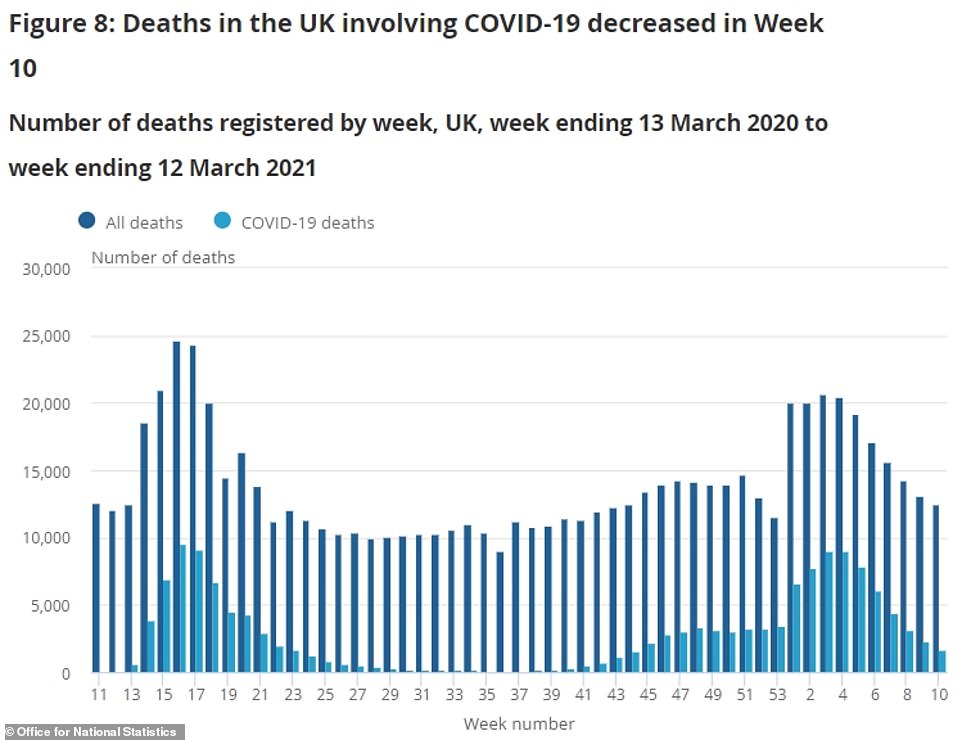 The number of deaths involving Covid is continuing to decrease. Experts say this is linked to both high vaccination rates and plummeting infection rates across the country, which are bringing the second wave to a swift end 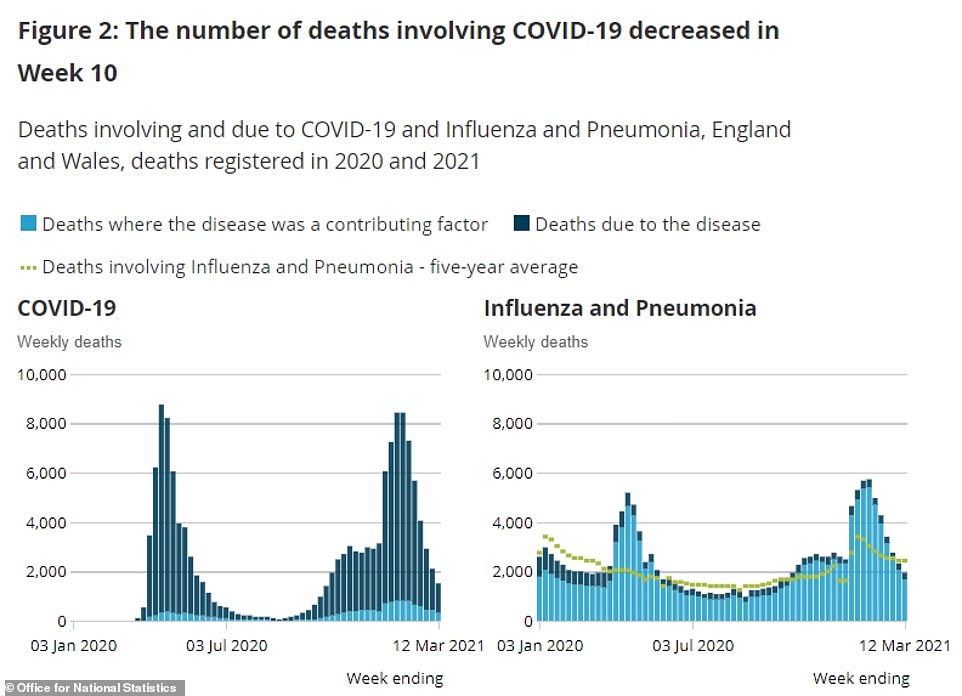 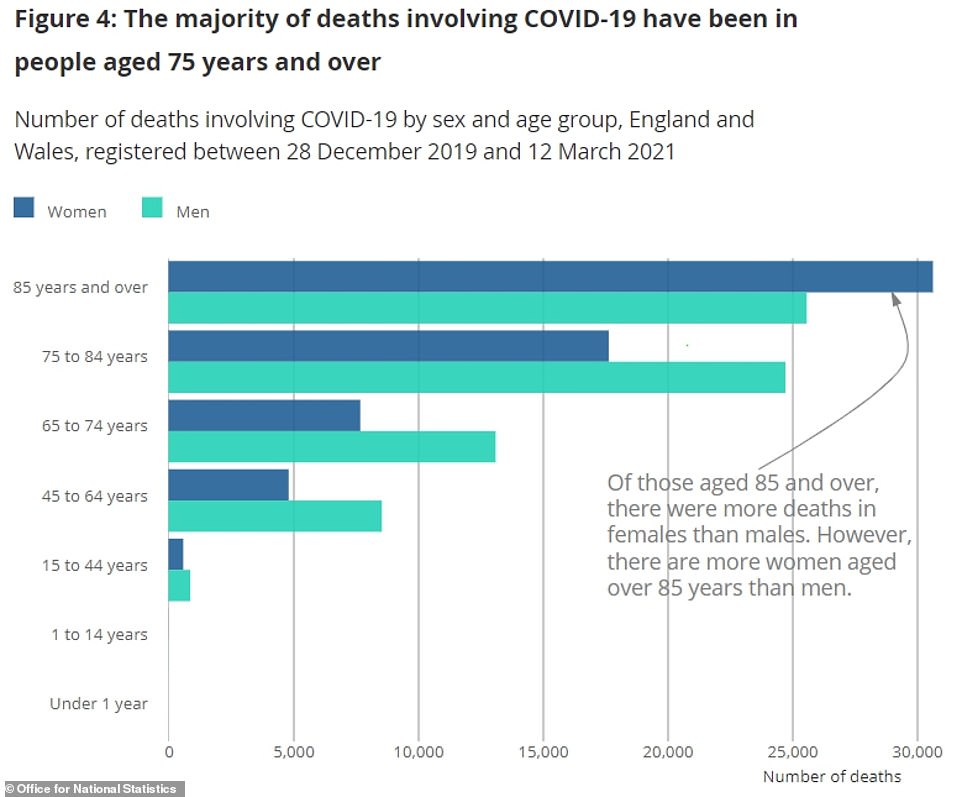 More Covid deaths have been recorded among those in older age groups, who studies show are at higher risk from the virus 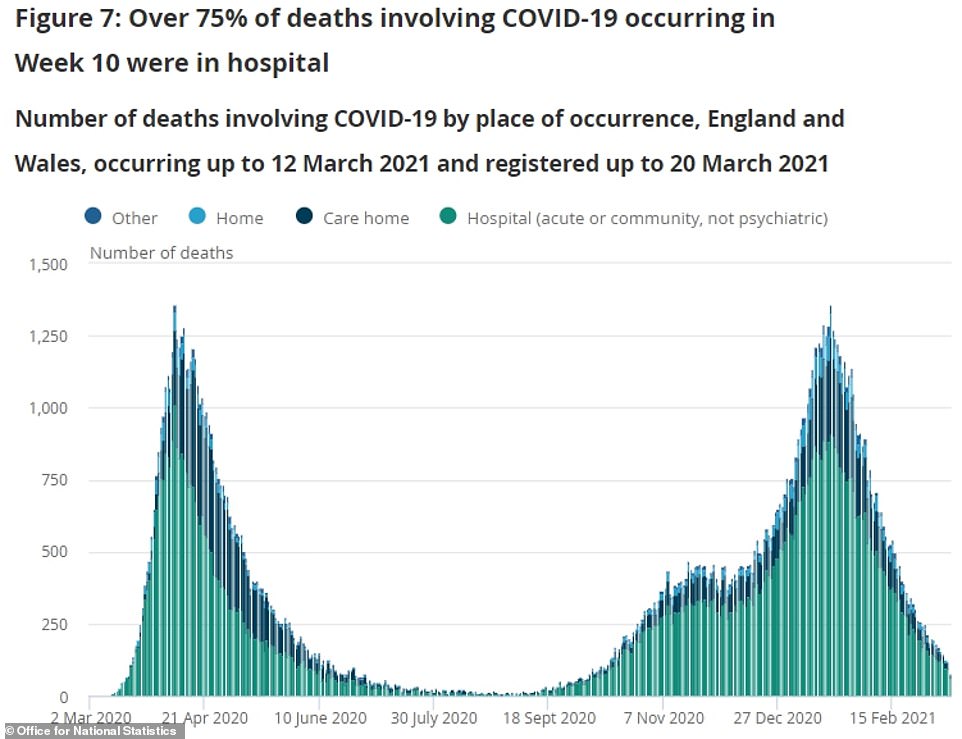