EDEN CONFIDENTIAL: Prince Charles’s stepson left devastated after the death of his girlfriend

Prince Charles’s stepson has been left devastated by the death of his girlfriend at the age of 42 after her cancer diagnosis was delayed by lockdown.

‘Tom had been blissfully happy with Alice and is devastated that life can be so cruel,’ says a friend of Tom, who separated from his fashion writer wife, Sara Buys, in 2018.

Ms Procope, known as Alice Horton while working as a diary reporter, died ‘peacefully’ at home on March 17.

An insider told Eden Confidential that, partly because of Covid, the mother-of-three’s cancer diagnosis didn’t come until last August ‘by when it was too late.’

It comes amid fears that thousands of cancer patients are missing out on potentially life-saving treatment due to delays in diagnosis during the pandemic.

Figures analysed by Cancer Research UK show that between March and January, referrals for lung cancer fell by 34 per cent.

In total the number of urgent GP referrals for patients with suspected lung cancer fell by 20,300 compared to the same period last year.

Speaking of Ms Procope, a friend said: ‘Partly because of Covid, Alice’s cancer diagnosis didn’t come until last August by when it was too late.

‘That’s what’s so really cruel and there will be countless others like her.’

Ms Procope was the granddaughter of the 2nd Viscount Ingleby and had three young children with her estranged husband, Robert Procope, grandson of baronet Sir Robert Wigram.

She leaves behind children Katherine, Wilfred and Georgia.

Charles is close to Tom and admired the way he has handled the future King’s relationship with his mother Camilla. 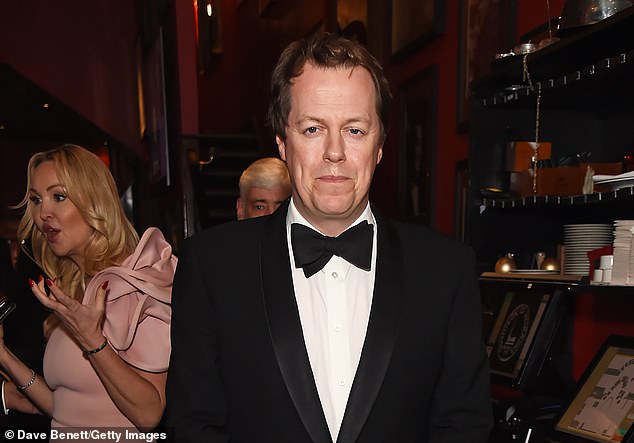 An insider told Eden Confidential that, partly because of Covid, the mother-of-three’s cancer diagnosis didn’t come until last August ‘by when it was too late.’ Pictured: Tom Parker-Bowles 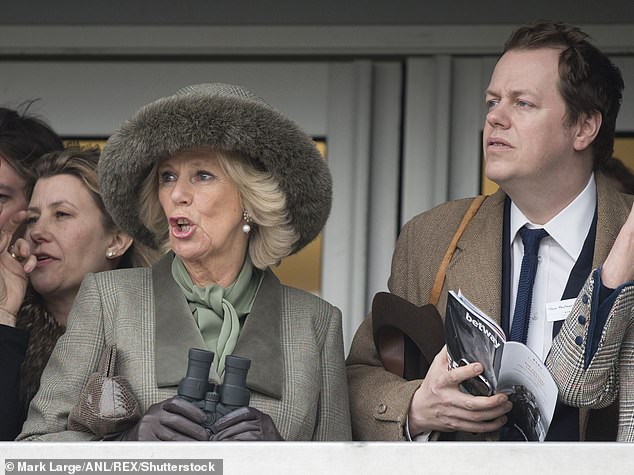 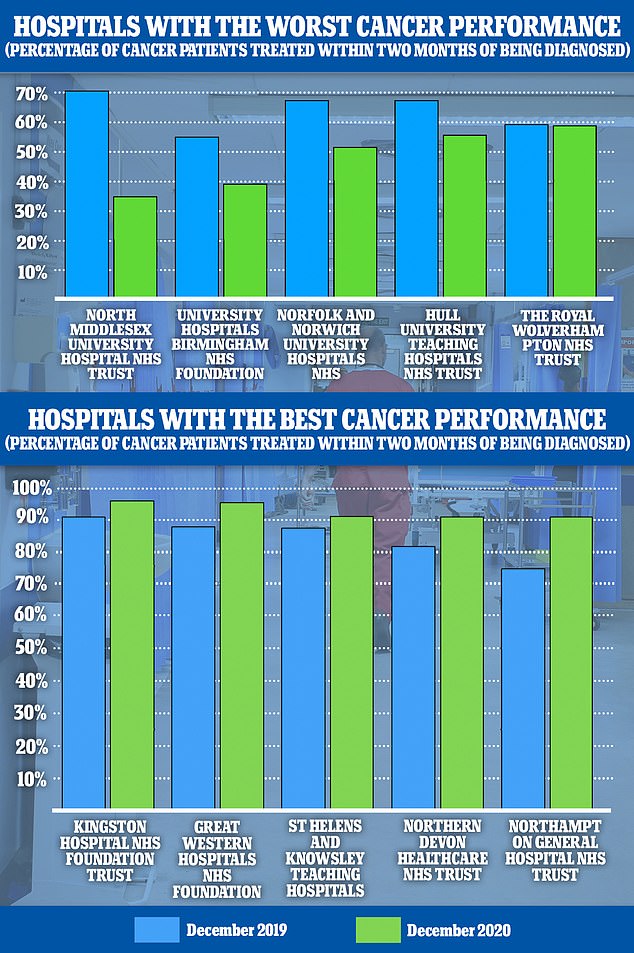 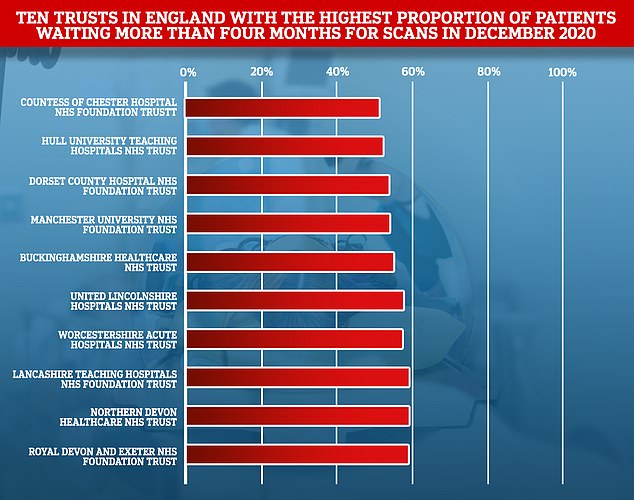 At school and university he was subjected to many snide remarks about his parents, in particular about Camilla’s lengthy affair with Charles and its effect on Diana.

In 2018, he moved out of the Shepherd’s Bush home he shared with Sara and their two children after 12 years of marriage.

He said: ‘All you care about your parents is they’re happy and my mother is exceptionally happy at the moment. I’ve always adored my stepfather; he’s always been a kind and good and lovely man. 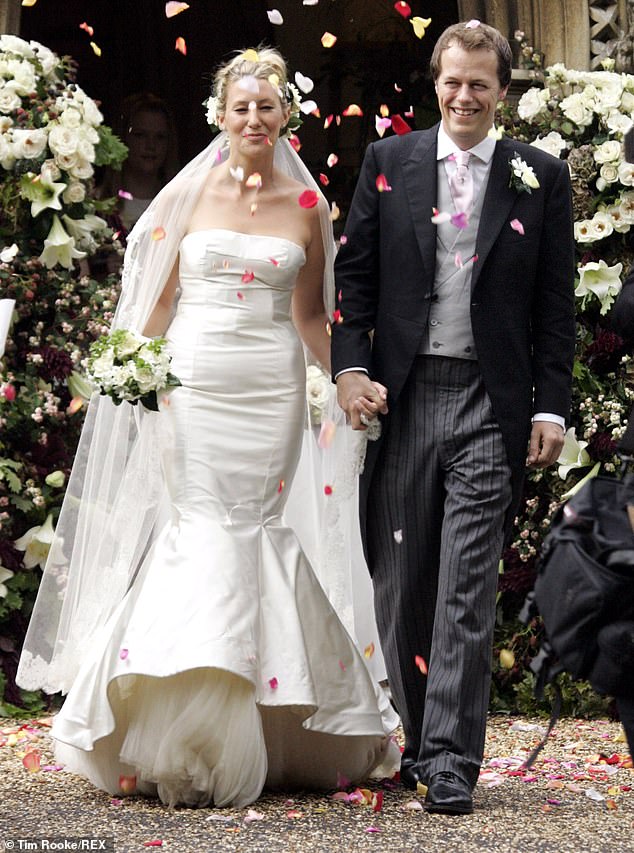 The wedding of Tom and fashion writer wife Sara Buys in 2005. The pair separated in 2018 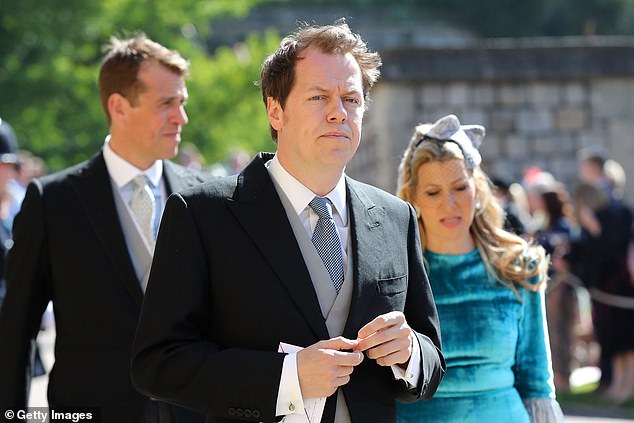 Tom Parker Bowles arrives at St George’s Chapel at Windsor Castle before the wedding of Prince Harry to Meghan Markle on May 19, 2018

‘He is a man of warmth, intelligence and humanity and I think if it ever happens, he will make a fantastic King.’

The food writer, whose sister Laura Lopes is an art curator, has written five cookbooks and won the Guild of Food Writers award in 2010 for his writings on British food.

He has also appeared regularly as a critic on Masterchef.

The death of Ms Procope comes amid growing fears over delayed cancer treatment, with tens of thousands of Britons understood to have missed out on vital appointments since last March.

Except for urgent appointments and emergency treatment, many hospital services were shut down in 2020’s first lockdown as medics anticipated a surge in Covid patients.

It took months for the NHS to get back on its feet and, during that time, the number of people waiting for routine operations surged to a record 4.46million.

As a result, many will start treatment later when their disease is more advanced and harder to treat, meaning they are more likely to die from it or be left disabled. 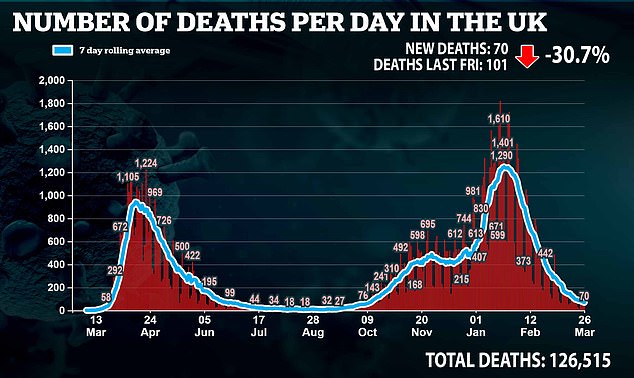 The Department of Health posted another 70 Covid deaths yesterday, down a third on the 101 recorded time last Friday. Experts have said the successful vaccination drive should keep these low as more people are immune to the virus 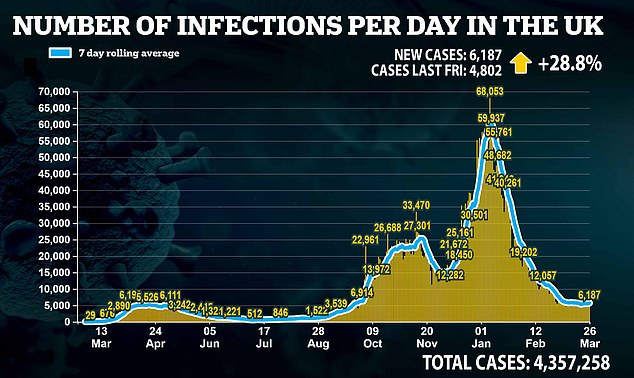 Covid cases rose 28 per cent, however, after 6,187 were announced compared to 4,802 from a week ago. The uptick is not a cause for concern, experts say, and was to be expected after schools reopened 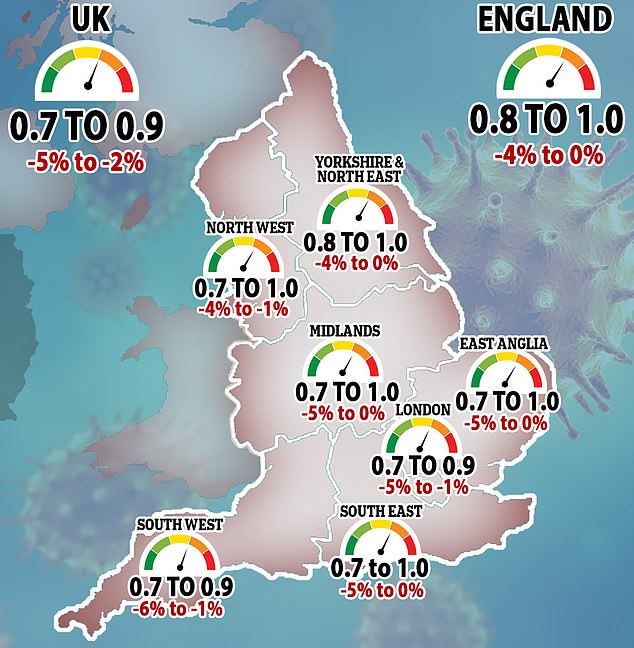 The World Health Organisation previously warned Covid has had a ‘catastrophic’ impact on cancer treatment, adding a ‘crisis is brewing’ due to scores of delays.

Figures released earlier this year revealed tens of thousands of Britons had missed out on potentially life-saving treatment during the crisis.

Surgery to remove tumours plummeted by one third during the first wave of coronavirus. From April to August, some 21,700 fewer patients had cancer surgery than in the same period of 2019, according to Public Health England (PHE).

The number of patients diagnosed with cancer from April to September last year was 35,592, a fall of one quarter compared with 2019 levels.

And in the eight months from April to November, 35,488 fewer patients started cancer treatments including chemotherapy and radiotherapy, down 17 per cent on 2019. 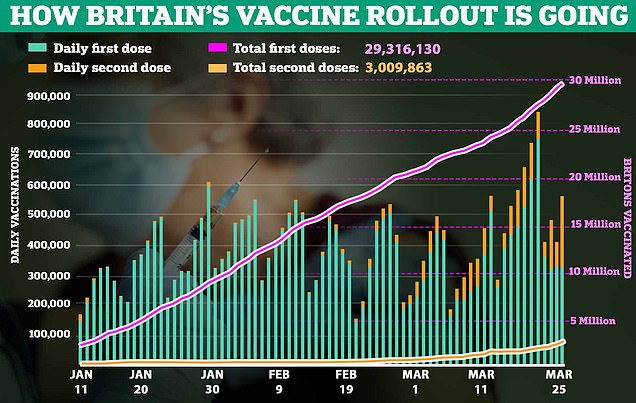 More than 324,942 first doses and 234,382 second doses were given out yesterday in Britain’s vaccination drive 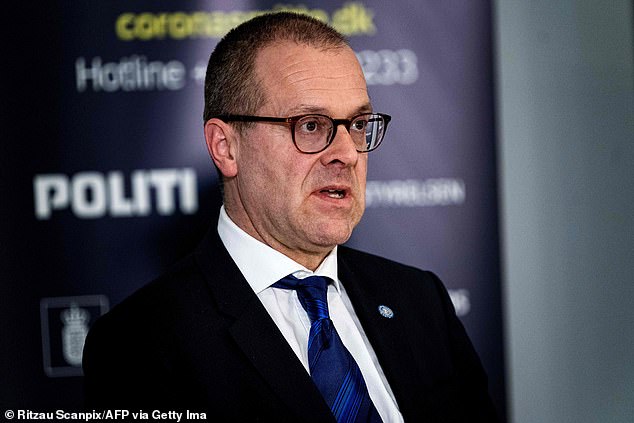 The World Health Organisation previously warned Covid has had a ‘catastrophic’ impact on cancer treatment, adding a ‘crisis is brewing’ due to scores of delays.  Pictured: WHO’s Hans Kluge

Cancer patients should ideally begin potentially life-saving treatment within 62 days of their diagnosis.

But no hospital trust in England met the target in December, while just a third of patients were seen within the crucial time-frame at two trusts in London and Birmingham.

Retired paramedic, 48, who was denied face-to-face appointment with his GP because of Covid pandemic is diagnosed with terminal lung cancer

Steve McGregor, 48, started having difficulties breathing last March and tried to get a face-to-face appointment at Trinity Medical Centre in Blythe Bridge, Stoke-on-Trent.

But restrictions on appointments because of the pandemic meant he had to wait until May to get an X-ray and phone consultation where he was told there were no issues.

Unconvinced of their findings because of his background in healthcare, he finally got a scan at Stafford’s County Hospital in November, when he was told he had inoperable, terminal lung cancer. 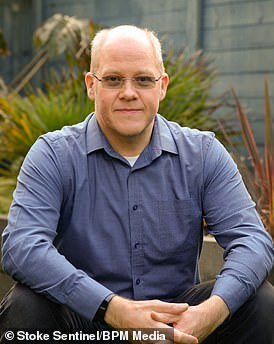 Steve McGregor, 48, started having difficulties breathing last March and tried to get a face-to-face appointment at Trinity Medical Centre in Blythe Bridge, Stoke-on-Trent

Mr McGregor, who worked for West Midlands Ambulance Service, now believes the cancer could have been operable had it been detected sooner.

‘I was concerned I may suffer hypoxia in the night. I did say that I had a concern that I may stop breathing.’

But Mr McGregor claims his GP refused to see or refer him for eight months despite making 20 phone calls to the surgery.

He was however able to get a face-to-face GP appointment following the scan at Stafford Hospital.

‘I have now been diagnosed with an inoperable lung cancer, I have never smoked and have been fit and well, I am only 48 years old,’ he added.

When approached, his GP Dr Bhalchandra Narayan Kulkarni said: ‘For reasons of patient confidentiality the practice is unable to discuss any aspects of patient care.’

In comparison, the figure was 646,000 for the same month in 2019. Fewer than half all of patients in Bradford and Chester had been sent for scans within the four-month target.

Dr Hans Kluge, the WHO’s regional director for Europe, said last month: ‘Due to travel restrictions and the enormous strain on health systems of fighting Covid-19, cancer services have been disrupted across the entire region, significantly delaying diagnosis and treatment, directly impacting the chances of a cure or survival for hundreds of thousands of cancer patients.’

Many more people will die in the coming years, particularly of breast and bowel cancer, for which screening appointments have been postponed, he said.

Dr Kluge’s comments echo concerns raised by cancer charities in the UK, who said shutting out patients in the spring would lead to a cancer time bomb.

Macmillan Cancer Support has been sounding the alarm for months that hundreds of thousands fewer appointments to discuss suspected cancer have happened during the pandemic, meaning growing numbers of people are living undiagnosed.

Dr Kluge added: ‘At the Kyrgyzstan National Center of Oncology, the number of cancers diagnosed in April last year dropped by 90 per cent, while in the Netherlands and Belgium in the first lockdown of 2020, it dropped by 30 to 40 per cent.

‘Delayed diagnosis and treatment in the United Kingdom are expected to result in an increase in the number of deaths from colorectal [bowel] cancer by 15 per cent, and 9 per cent for breast cancer over the next 5 years.

‘A crisis of noncommunicable diseases, including cancer, is brewing, brought on by the pandemic.’

As a result, the majority of ‘non-essential’ medical care was suspended so the health service could direct its efforts towards preparing for coronavirus.

Even patients who didn’t have their appointments or operations cancelled were found to have been too afraid to turn up for fear of catching coronavirus or putting extra strain on the NHS.

This has since filtered through into a spike in the number of people dying in their own homes.

While non-Covid deaths in hospitals fell to lower-than-average levels last year, home deaths rose. Experts say this may be because people avoided hospitals.

Macmillan Cancer Support said last month that the number of people who saw a cancer specialist doctor between March and November 2020 was 350,000 fewer than during the same period in 2019, a drop of 19 per cent.

The number of people starting treatment for cancer is also still significantly lower than average.

Some 9 per cent fewer people started treatment for lung cancer between April and January, the equivalent of 2,600 patients.

Cancer Research UK surveyed 1,000 GPs across the UK in February on the reasons why diagnosing lung cancer had become more difficult during the pandemic.

It found that nine in ten GPs were most concerned about patients being reluctant to attend hospital for tests and more than three quarters felt patients with symptoms were not seeking help.

Lung cancer is the most deadly type of cancer but if it is diagnosed early when it is more treatable, 57 per cent of people will survive for five years or more. 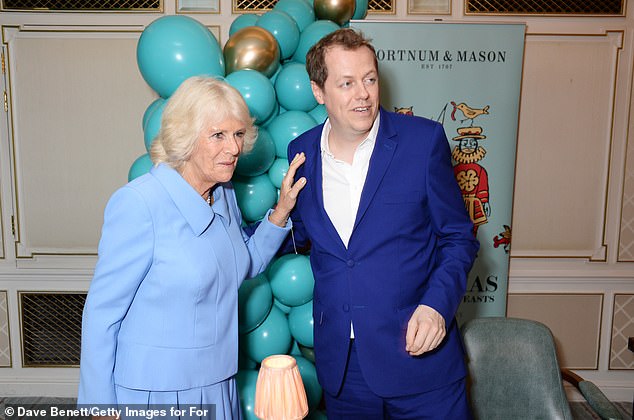 Camilla, Duchess of Cornwall, and Tom Parker Bowles attend the launch of his ‘Fortnum & Mason Christmas & Other Winter Feasts’ cookbook 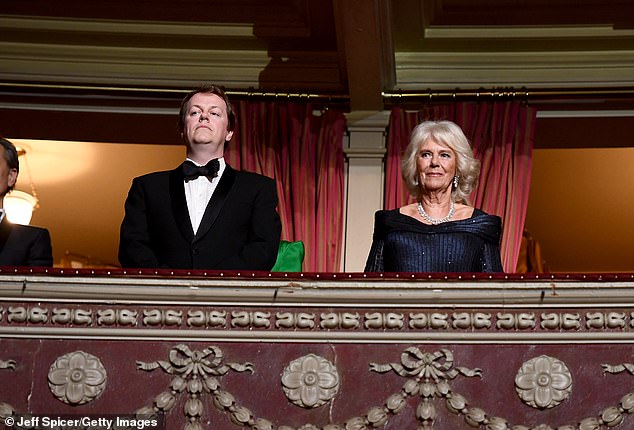 Tom Parker-Bowles and Camilla, Duchess of Cornwall watch The Olivier Awards in 2019

This compares with just three per cent of people diagnosed at the latest stage.

‘While initial advice to stay at home and isolate if people had a new, continuous cough, could mean some people understandably delayed seeking help, we know delays to potentially life-saving treatment may mean lung cancer could progress.

‘Covid-19 has created a perfect storm of problems, but the tide is turning as cases drop and vaccines are rolled out.

‘Hospitals and surgeries have worked hard to make services as safe as possible, so it’s vital that people with symptoms, like a cough that lasts longer than three weeks, a change in a cough you’ve had for a while or coughing up blood, contact their GP and attend any follow-on tests.

‘For those who’ve been unable to get through to your doctors’ surgery, I would encourage you to keep trying, GPs like me are still here to help you.’